News in the press...

The children at the school just outside of Bridport have been dressing in fashions from the Victorian era right up to the present day.

They have also had a party this afternoon to celebrate with all their parents and the villagers of Symondsbury.

Headteacher Emma Roberts said: "We have had a very special service this morning where we've been through the ages with song and dance.

"Each class is set out in a different era in time. They start off in 1868, work through to the late Victorians, then they go through into World War 2 and into the 70s and 80s. Then they can come and see what the history and the future looks like for Symondsbury Primary School."

UPDATE: Chaise has braved the chop

Symondsbury school pupil, Chaise Lannon, may only be six years old but she's determined to make a big difference to the world around her.

Charitable Chaise has proudly donated 12 inches of her hair to The Little Princess Trust, the charity that provides wigs to children with cancer as well as raising over £850 in sponsorship for the charity.

She braved the chop at Bridport salon, Mango, who cut he hair free of charge.

Mum Chelle Barnes said: "A very excited, slightly nervous Chaise braved the chop last week. Once sat in the chair her last minute jitters dissolved and she smiled throughout the hair cut and has been smiling ever since as she loves her new look and is so pleased to be sending her hair off to help other children.

"We would like to say a huge thank you to Kendal from Mango for cutting her hair free of charge, to Symondsbury School for hosting a messy hair day that raised £80 and gave Chaise so much support and of course to everyone who has donated and wished Chaise luck over the last three weeks.

"We are really humbled by everyone's generosity and Chaise has raised a staggering £850 which The Little Princess Trust can use to buy additional wigs for children who need them."

Chaise's headteacher, Emma Roberts, added: "We are all so proud of Chaise here at Symondsbury School. Her generosity embodies our school values and the spirit of our "One hundred ways to change the world" campaign - she is a great role model!"

Chaise's efforts will form part of Symondsbury School's 'One hundred ways to change the world' project which sees the children's charitable and community activities recorded and celebrated, as well as being shared with the global WE movement joining together those that want to make a positive difference.

7th Dec 2017: Bridport News
'No confidence at all in the accuracy of the judgements': school issues 'serious complaint' after Ofsted inspection
A school has issued a ‘serious complaint’ against an examining body after being told it requires improvement.

Symondsbury Primary School has raised a complaint against Ofsted following a recent inspection which, it says, was carried out ‘without proper process, quality standards or effective use of evidence.’

The school had previously been rated as good, but a report published today states that it requires improvement.

Read the full article on the Bridport News website...

The full Ofsted report can be read here: http://www.symondsbury.dorset.sch.uk/docs/General/Ofsted_final_report_2017.pdf

If you have any questions at all about the Ofsted report we would be happy to discuss it, to explain the way in which we are already addressing many of the areas raised within it and the reasons why we are compelled to raise a complaint against Ofsted.  Please contact the school office if you would like to make an appointment to find out more.

29th Nov 2017: View From Bridport
Symondsbury School Gets Crafty for Christmas
SYMONDSBURY Primary School could be mistaken for Santa’s workshop this month as pupils are hard at work producing a wide range of festive crafts to go on sale in the run up to Christmas.

Each class is busy preparing its own set of seasonal gifts and decorations to sell while members of the after school arts club are also making a range of cards and other delights, with the help of parent volunteers.

Items will first go on sale at the popular Christmas fair, organised by the Friends of Symondsbury Primary School, held this year on Friday, December 1st from 5pm to 7.30pm.
https://www.viewnews.co.uk/symondsbury-school-gets-crafty-christmas/

3rd Nov 2016: Bridport News
Headteacher sent to prison following trial by Symondsbury school pupils
LAST week, William Kennett, the former headteacher of Symondsbury Primary School, was sentenced to ten years in prison.
It won’t bother him too much, as he died in 1910. But it was a surprisingly tough sentence, handed down to a missionary who went to Australia in 1867 to “christianise” the natives, and came back home two years later with an Aboriginal and a kangaroo in tow.
The sentence came from Symondsbury School class three and four students - aged from seven to eleven...
http://www.bridportnews.co.uk/news/14841167.Headteacher_
sent_to_prison_following_trial_by_Symondsbury_school_pupils/ 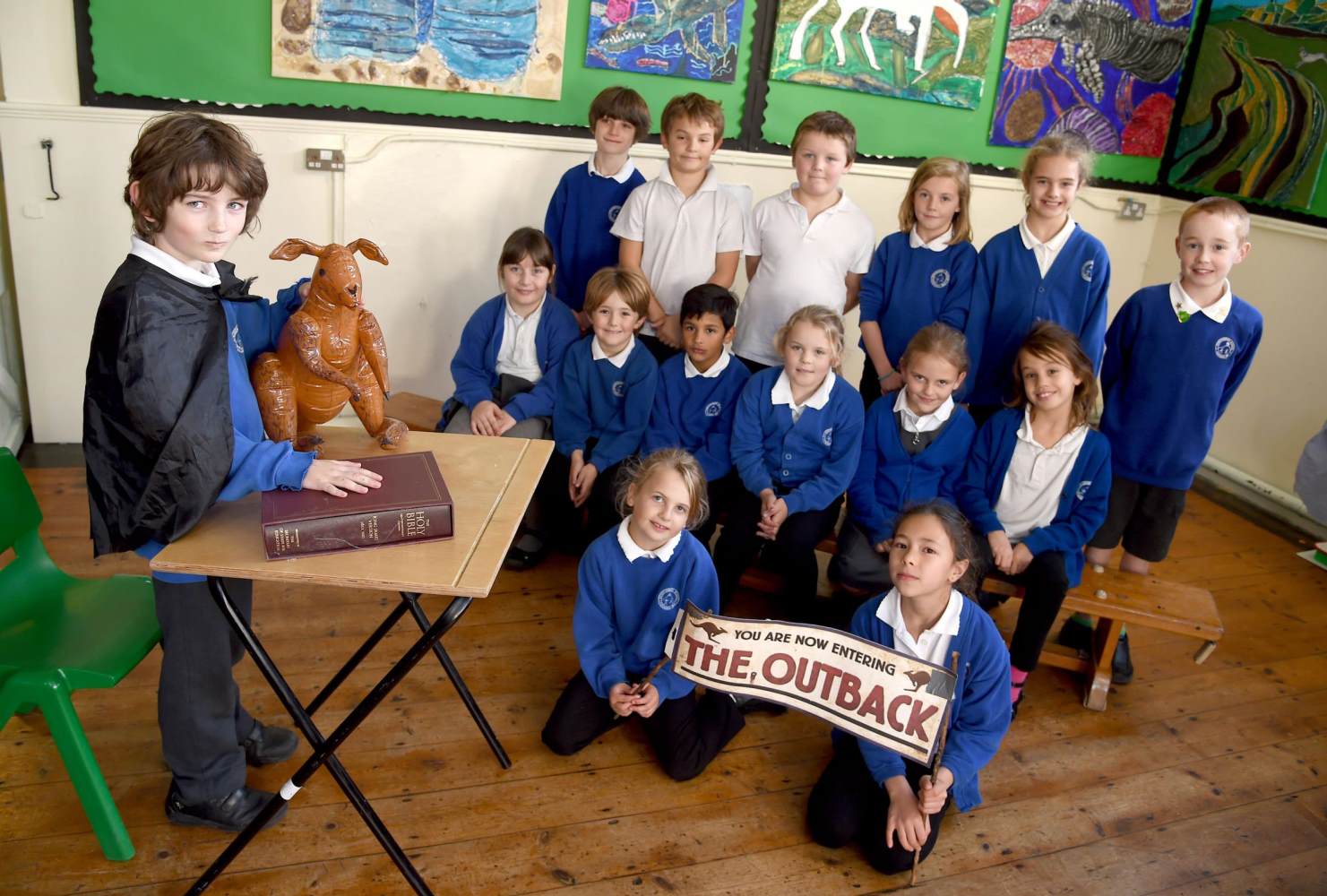 2nd Nov 2016: View From Bridport
Seasonal Fun at Symondsbury School
PUPILS at Symondsbury Primary School headed off for their half-term break in seasonal style this year – first enjoying a spooky pumpkin party and then participating in the annual school cross country run around Colmers Hill....http://www.viewnews.co.uk/seasonal-fun-symondsbury-school/